The emergence of KP Twente in the Twente region

in the beginning of the Second World War there were local resistance groups, who were not aware of each other’s existence. Their opposition to the German occupation initially consisted of small resistance actions, which would later become more organized resistance and interfering behaviour.

At the end of 1941, the first national organization: the Orde Dienst (OD) were formed.  They made and disseminated illegal propaganda  and built the secret service.

In the autumn of 1942, the Landelijk Organisatie (LO) (Regional organization) and the Landelijke Knokploegen (LKP) (Rural resistance fighters) was  set up. The LO gave aid to people in hiding, the LKP organised the theft of  food stamps, documents and identity cards for those people in hiding. In 1943, the Council of Resistance (Raad van Verzet ) was initiated, consisting of many old soldiers, who were specifically concentrating on sabotage: blowing up bridges and railway lines, collecting information and sending the data to London. In September 1944, around Mad Tuesday, Prince Bernhard was busy with all sorts of different actions to try and unite in the Domestic Forces, despite mutual rivalry between them.

A successful ‘freedom action’ on March 22, 1944 made a significant contribution to the close cooperation in the Twente FP. On March 13, 1944 Fons Gerard is arrested for treason. Because he had a false passport that was issued in Borne, which was the municipality of staff member Piet van Dijk. Herman van Heek en Gé van Riel asked  Daan Hillenaar and Cor Hilbrink of the FP Zenderen  to make a ‘freedom action’. Also, at the same time Herman Höften took the initiative for a ‘freedom action’. At the last moment, Daan Hillenaar heard about the other ‘freedom action’ and informed FP Zenderen that their planned action had become superfluous. He did this to prevent alarm in the FP in Zenderen. To prevent such a dangerous situation the FP Zenderen and Almelo had to work together. In June 1944, in Twente, there were three groups in the LKP, the FP Zenderen, Enschede and Almelo. They beginto work  more closely together. The central figure in the Twente FP is without doubt Johannes ter Horst. After Johannes ter Horst was murdered by the occupiers, Cor Hilbrink took on the leadership task.

The group’s involvement in various escapades is documented, from weapon drops and attacks on distribution offices, to liberating captured colleagues from German prisons. 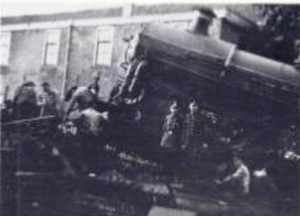 Derailment by the KP in Almelo De Riet

Railway sabotage by the KP

In May 1944, the founder of the L. O. , Frits de Zwerver was arrested by the Germans and imprisoned in Arnhem. A group  of KP resistance fighters, under the leadership of Johannes Ter Horst, devised a plan to liberate Frits de Zwerver only ten days after his arrest!

After Mad Tuesday September 1944 the group was day and night busy with railway sabotage. In Wierden, weapons and three S.O.E. soldiers with transmitters were dropped by UK forces. The three S.O.E. agents had to instruct the locals on the weapons and radio equipment. They found shelter in Huize Lidwina. 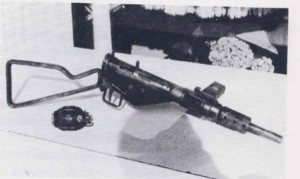 In Twente, a discarded Stengun and hand grenade. 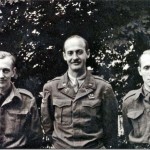 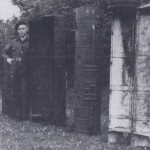 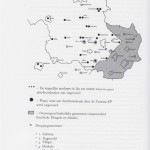