The arrest of Johannes Ter Horst

On this Friday, Johannes Ter Horst leaves Huize Lidwina  for Almelo to visit  a resistance fighter injured in a railway sabotage job. As it was late, he decides to go with a motorcycle even though others  tried to discourage him. In Almelo at  around six o’clock he was stopped by the Dienststelle van de Feldgendarmerie in Bornsestraat, in connection with inspection of motor vehicles. His motorcycle was seized and he must continue his way on foot. Johannes did not want to give up his motorcycle, and in an attempt to evade frisking he shot at the German. During the pursuit he was shot in the leg and then had to surrender to the occupiers.

He was thrown into  a car and kicked and beaten, then taken to the Dienststelle. A police officer who witnessed the attack asked his contact Herman Hoeften to find out who the wounded resistance fighter was. Herman immediately called Huize Lidwina. It was confirmed that Johannes ter Horst went with the bike to Almelo. When this news was announced at Huize Lidwina, necessary measures were immediately taken . All incriminating papers and weapons were removed from the house and placed elsewhere. The three soldiers were taken to a safer place along with their radio equipment. 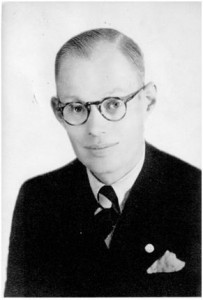 In the early morning on Saturday Ria Hermans was arrested in a raid in Hellendoorn. Under threat she claimed to be the Fiancée  of the leader of the underground, Albert Ferdinand Lancker.  She also stated that she had, once or twice, been  at the headquarters of the underground in Zenderen In the car that took Ria Hermans  to the Dienststelle in Almelo, she tells that she was never allowed in, but further she told them that the house had a garden, and that there was a  fence around it , so that she could recognize the house.

Around 10:30 Ria Hermans comes to the Dienststelle of the SD  on the Bornsestraat in Almelo. The staff were mobilized and three cars arranged. It must have been an hour later, when a 12-strong group of Germans, directed by Ria Hermans drove off in the direction of the KP headquarters.

They did not directly find Huize Lidwina   Several times the cars drove to the wrong location.

Eventually, at about 11.00, Ria said, ‘I believe it is here’  while pointing at the entrance gate to Huize  Lidwina. The Germans are so intent on success, that they do not plan how they will tackle the matter. They also do not how many people are inside, if they are armed or what the local situation was in there. They smelled blood and went storming ahead …! 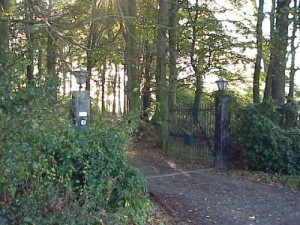 At the same time in the KP headquarters ..

Not all issues could be completed the previous night. Therefore, there are a number of resistance people still in the house. They had returned around 8:00 a.m., or had spent the night trying to complete the arrangements, and when that has been done they had  a thorough  look around to ensure that no evidence remained.

At the moment the cars approached the headquarters everything  had been collected together. Chiel Ploeger said he would pick up the car so that everything could be loaded. Just at that moment the alarm bell at Lidwina, indicated that there was a car coming. It is about 100 meters (92 yards)  to the house. The road goes through a small forest.

At that moment, everyone was alarmed and on seeing the arrival of the German cars, Daan Hillenaar, shot his gun empty. They no longer had access to the ‘Sten guns’  because they were  all packed, or had already been moved.

Chiel Ploeger, who went to pick up the ca, and was walking in the forest at that time, is overlooked. The Germans walk past him and get closer to the villa. Daan throws a grenade towards the Germans, so they are forced to take cover.

Daan makes good use  of the diversion and runs in the direction of the field and then jumps into a ditch. Koos Michel, who runs in the same direction, heads for the railway. Chiel stays where he is, in the woods at the front and remains motionless.

Another man is fatally shot by the Germans. This was Coen Hilbrink. At the moment he is shot, he has his gun with two cartridges and a hand grenade with him.

Another man, Dirk Ruiter, is wounded, but not mortally wounded, and was later  overpowered and captured.

Sietse Hilbrink, the father of Coen, who was hiding behind some bushes in the garden, it is also discovered. Before he puts his hands in the air, he still sees a chance to throw ‘something’ into the pond.

There are also two women present, who the previos eveining had come to help with the evacuation. These were Hermina Ter Horst – Schreurs, wife of Johannes Ter Horst, nicknamed ‘Miny’ and Jo Krabbenbos. Both women were couriers for the K. P.

They are roughly arrested by the Germans.. Both are violently assaulted, but they remain with their statement that they had just arrived at the house.

One pretended to serve as a ‘maid’ and the other as ‘laundress’ who just wanted to pick up the laundry. After a brief interrogation, the women are let free.  Apparently the Germans  believed the stories  told by the two women.

At about 13.00 the Germans have everything under control. One of them is instructed to drive to Almelo and report the great success to the commander.  Commander Kronenberger, let him drive back to Zenderen, after he has heard the story.

When Jo and Miny left at 14:00,  Dirk Ruiter  is led out and placed before a German watchman called Buro. Dirk faces Buro, at a distance of about 4 to 5 meters. Buro aims his gun at the chest of Dirk and fires. Dirk falls dead to the ground.

Herman Schrader pities the old Hilbrink, whose son also has just been shot and asks Sietse ‘Have you anything to say? I make sure that you are not killed! ‘Sietze look at Schrader. Schrader sees Sietze was wounded in the head. Then Sietze says, ‘I have nothing to say!’ After this, he is also brought out and placed in front of Buro. This time Buro apparently has no qualms to shoot a man so near to death.

The chief of  Buro found him to be a brave man for committing  these shootings and rewarded him with the watch from the old man.

Coen Hilbrink, Dirk Ruijter and Sietse Hilbrink were shot by the Germans

After the bodies are placed in the house, they blew up the entire villa using explosives.

The remains of the villa